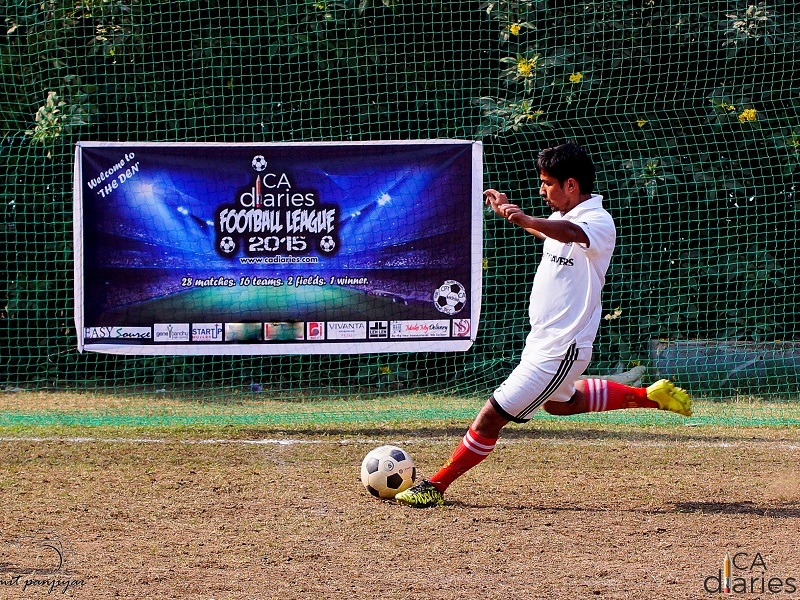 On the crisp winter morning of Sunday, 20th December, 2015, CA Diaries organised the first ever and one of its own kind street football event CA Diaries Football League, 2015 at ‘The Den’, Ghitorni, Delhi. The venue had CA written all over it, right from the registration desk to the players to the commentators’ desk, it was there for all to see.

The enthusiasm of the players was unbeatable, around 150 players were present and warming up well before their matches were scheduled to start, reflecting the true spirit of sportsmanship. The league had 16 teams with each team having cool team names such as Statutory Spartans, Legal Legends, Risk Mitigators, Scrutiny Warriors, GST Gladiators, Startup Warriors to name some. Teams like Startup Warriors, Sceptical Auditors, Penalty Savers and Whistle Blowers were powered by our sponsors Startup Movers, Gene Bandhu, NS Academy and Easy Source respectively. 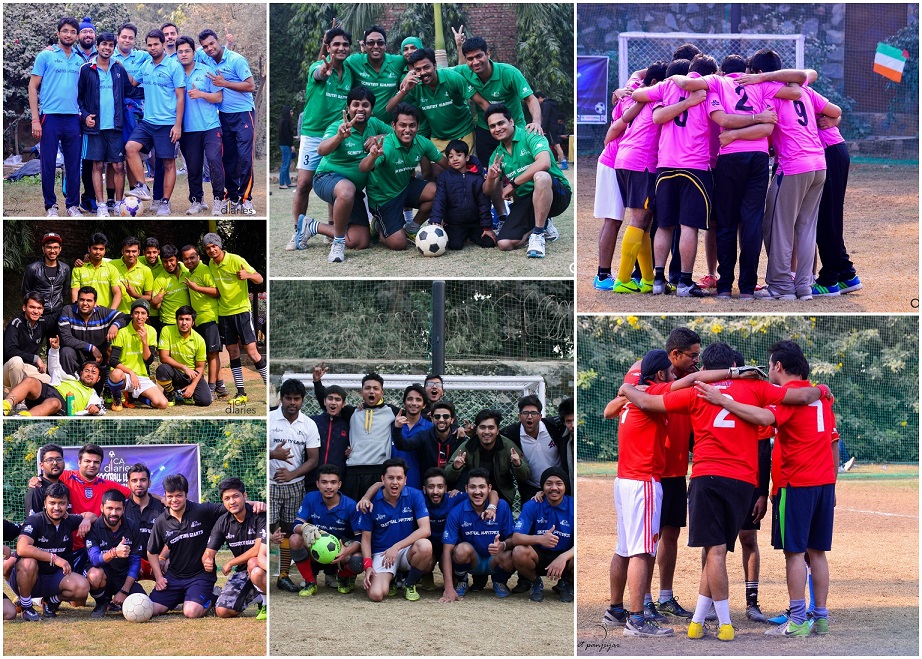 Sharp at 10:45 AM, all the players, ready in their colorful football jerseys marched onto the grounds; the Gods of Duncan Edwards and George Best of Manchester United would have been amused at the sight of the rainbow splashed over the green football ground.

The event was kick started by CA Anjani Kumar Sharma’s motivating words about football not being just a game but a religion and its pertinence in social development, followed by a melodious rendition of the National Anthem by CADet CA Anshuman Sharma on the flute. 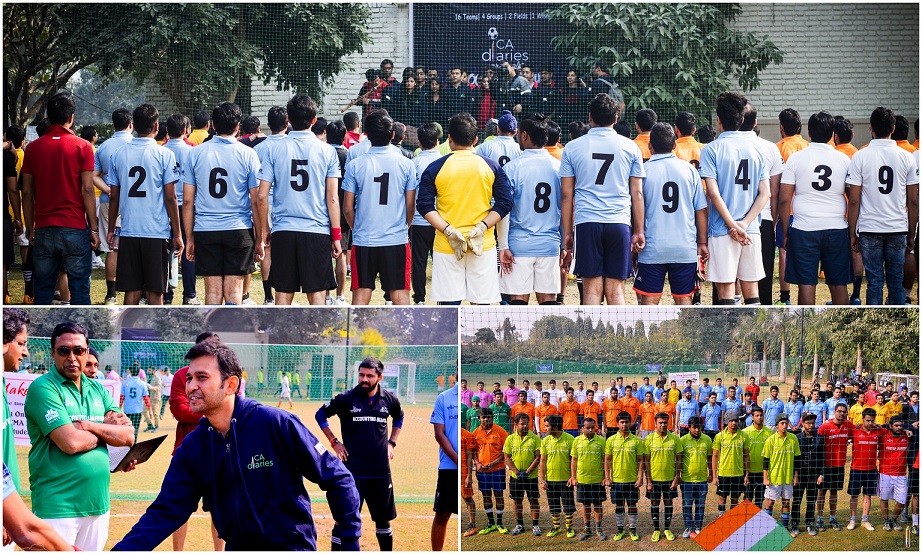 Each team squad consisted of 9 players each. The 16 teams were divided into 4 pools. Each team got an opportunity to prove their mettle by playing at least 3 matches. Finally 1 team, from each group qualified for the semifinals. In total, there were 28 matches of 20 minutes each with 2 matches taking place simultaneously in the two adjacent grounds of the venue.

The game of football was a great revelation. For the first time, we had CA students and Chartered Accountants from the different locations and of various age groups displaying a remarkable combination of strategy, teamwork and physical stamina. The high energy and aggression of the players added a zing to the event. We could see ICAI Central Council Member CA Atul Gupta performing the goalkeeper duties for Scrutiny Warriors, Ex-Chairman from NIRC Faridabad Branch CA Gautam Goyal keeping the goal for Risk Mitigators, while teams like Crouching Tiger and Accounting Giants from BDO International and KPMG respectively. The league saw participation from all across Delhi/NCR, with students and members coming from UP, Rajasthan and more states. 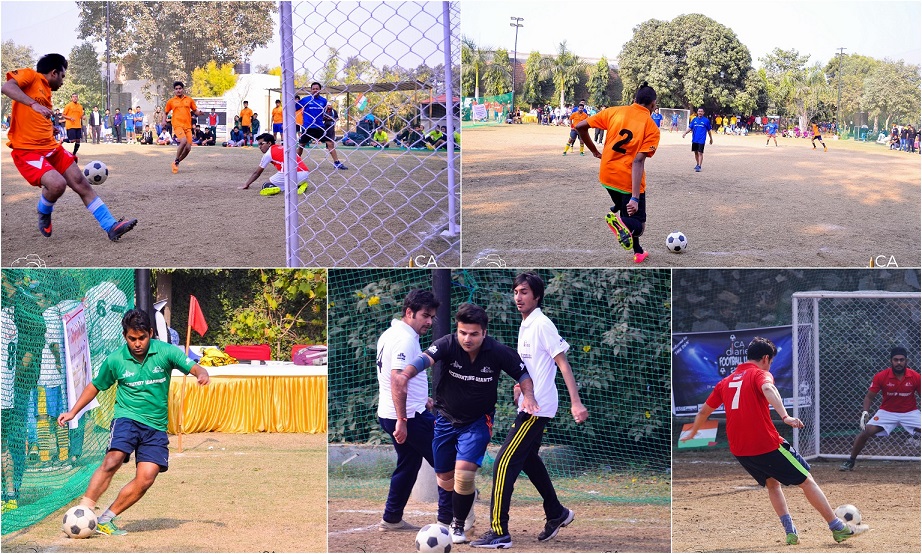 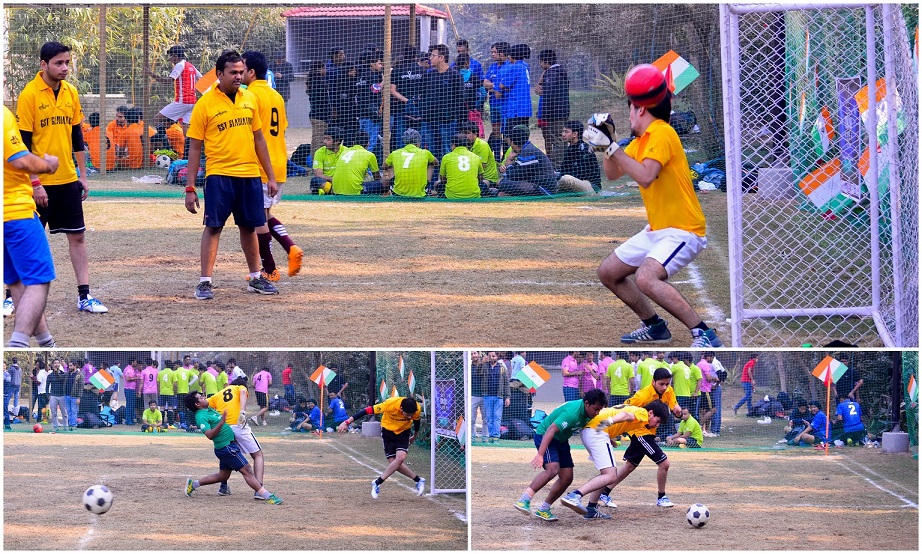 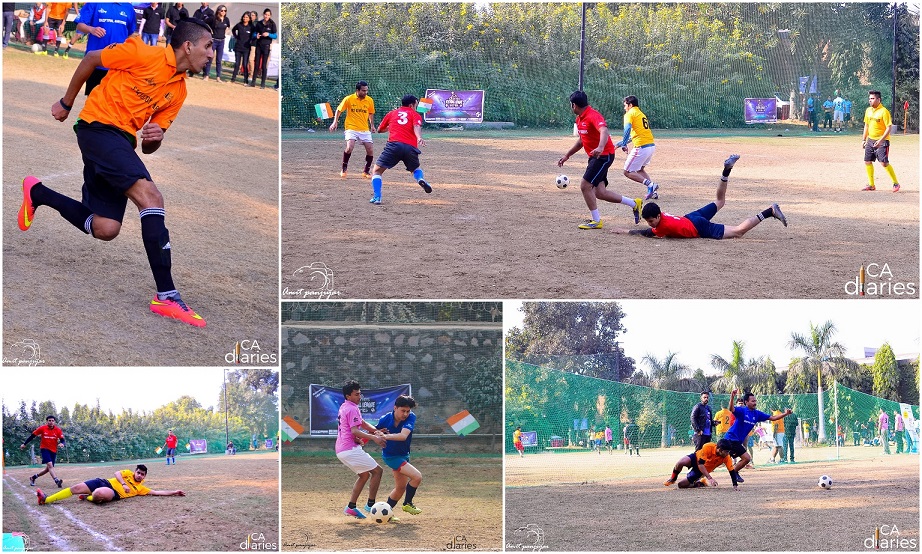 The show was hosted by our very own Radio City’s CA Keshav Agrawal from Jaipur and CADet Arjun Sobti. Equipped with wit and humour, they kept the audience hooked to the different nuances of the games, conducted the post-match presentations and other happenings at the venue all day long. 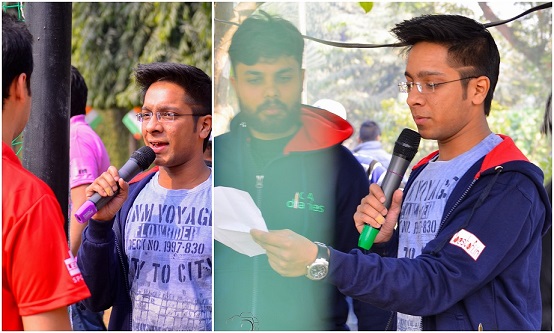 Our Sports Partners from the Leh Leh Sports ensured the smooth running of the continuous series of matches and that the sports management was top notch.

The audience cheered loudly for their favorite team and swayed to the beats of the peppy music being played in the backdrop. Other than football, the audience and the players (in their spare time) experienced the joy of playing the comical game of ‘Dizzy Penalty’, a modified version of which has enjoyed and appreciated as “Chakrayuh” at our Freedom Festival. Click below to see how participants faired at this.

GoalMaal Goal @ CA Diaries Football League 2015You all are invited to take the GoalMaal Goal Challenge for the Audiences at the CA Diaries Football League! Can you do better than this? Sunday, 20th Dec at The Den, Ghitorni (5 mins from Ghitorni Station on Yellow Line Metro) – Entry Free on first come first basis, Be There!Everything you want to know about the event: https://www.facebook.com/events/1712957508935363#CADiaries #CADFL

One corner of the venue was decorated by the masterpieces of the Picasso of the Chartered Accountant world, Gaurang Makhija (CA Final student) our featured guest in the Articleship column of Sep’15 (Click Here for read more about him). The brilliant usage of brushstrokes captured the attention and held it to itself. His innate ability to bring his subject matter to life in his artwork made it even more surreal and mesmerizing.

Our Apparel Partner Best Of I, managed by Kanika and Bajrang (CA Final students) had also set up a kiosk.“Bestofi.in” is a website where you can get CA themed t-shirts, sweatshirts, mugs, etc. customized. Their products were quite popular at the event with more CA and CA students wanting their own customized products. Our own CA Diaries Hoodie is up for sale at BestofI.in . Click Here to buy the coolest CA Diaries Hoodie in town! 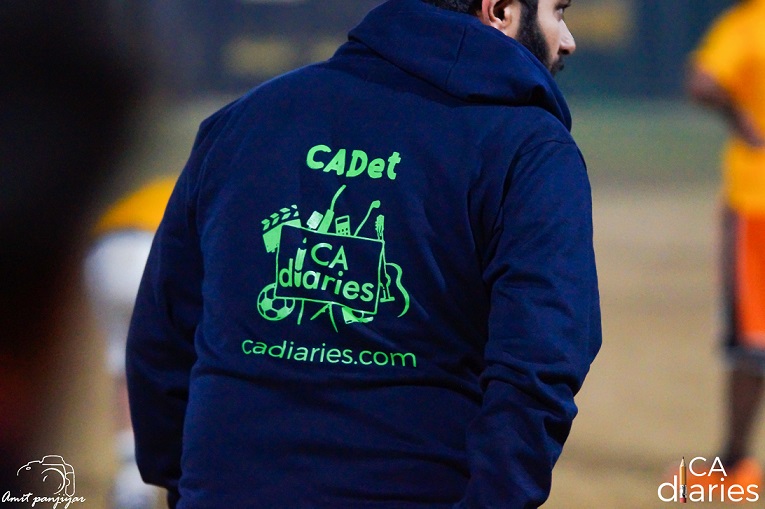 The other Kiosk was put up by Jyotsna Sharma, co-founder of Talks Over Coffee. Some of the things on exhibition were, coffee mugs, extremely pretty handmade trinkets, Christmas decorations and personalized diaries. It had all the vibrancy of the winter holidays written over it and was crowded around by girls and guys alike.

The players and the audience were pumped up by the presence of CA Kulvinder Ruhil, a.k.a. ‘Sehat Singh’. Apart from being a fitness freak, he has his own website as sehat singh, to encourage people to take to a healthy lifestyle. He had the adrenaline rushing of the volunteer participants when he conducted a quick competition to see who could do the maximum number of push ups on stage at that very moment. 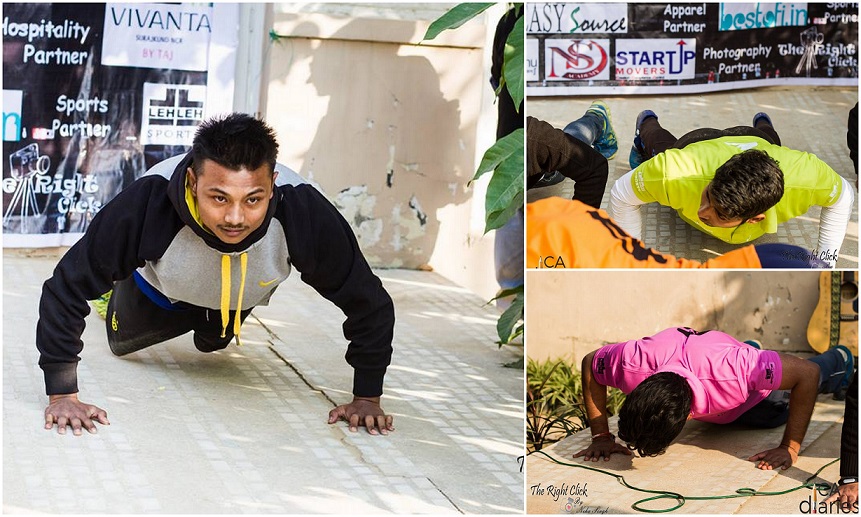 Makemydelivery.com co-founder, one of our event sponsors Anuj, announced 50% discount coupons for all the man of the match winners.

As the sun began to set, the results of the four semi-final teams were declared, they were- Legal Legends, Sceptical Auditors, GST Gladiators and Penalty Savers. While the teams were given time to prepare themselves for the match, the audience were kept entertained by the musical recital performed by The Ankit Bajaj Collectives. The spectators were mesmerized by the evergreen numbers sang by Arunima Pandey, CA Ankit Bajaj, CA Anjani Kumar Sharma, CA Krishna Tyagi and CA Anshuman on the flute and morchan (a folk instrument). 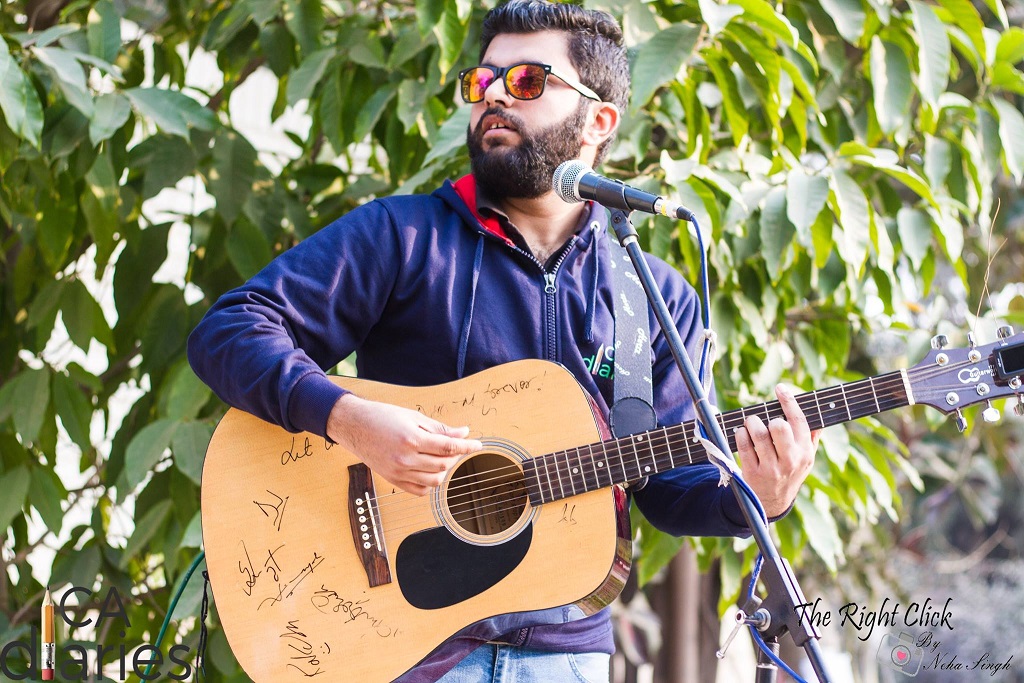 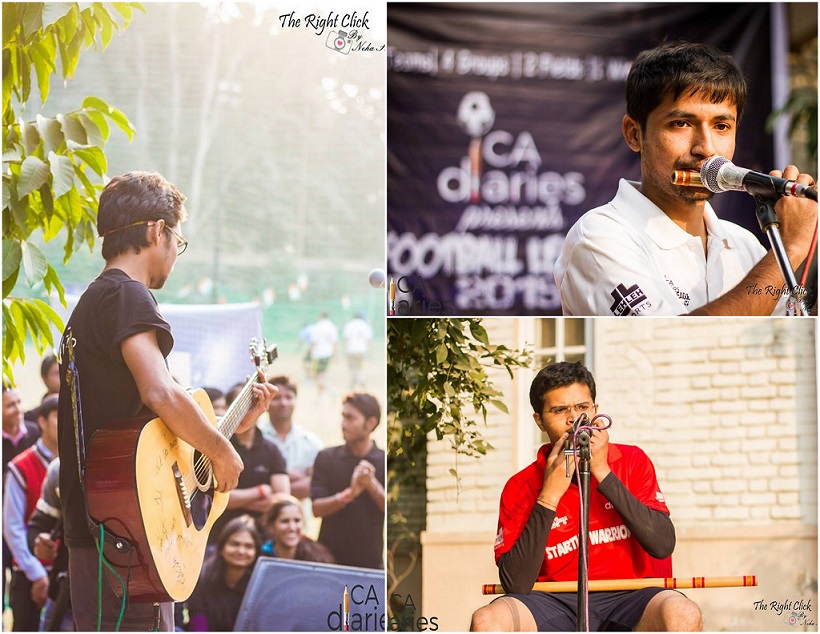 After the musical treat, everybody’s attention was drawn to the semifinal matches. In Ground 1, it was Legal Legends vs Penalty Savers and in Ground 2, it was GST Gladiators vs Sceptical Auditors. These matches were crucial. In the Ground 1, the Legal Legends emerged victorious with the score of 3-0. Meanwhile, in the Ground 2, the score was 1-1 and hence, a tie. To break the tie, a penalty shoot out, with 3 chances given to each team, was organized which again resulted in a tie. Now, the result of this match was dependent upon ‘sudden death’. It was a nerve racking moment testing the temperament of each member of both the sides; everyone had their breaths held till the time the Sceptical Auditors broke the tie by finally scored a goal and secured their place in the Finals. 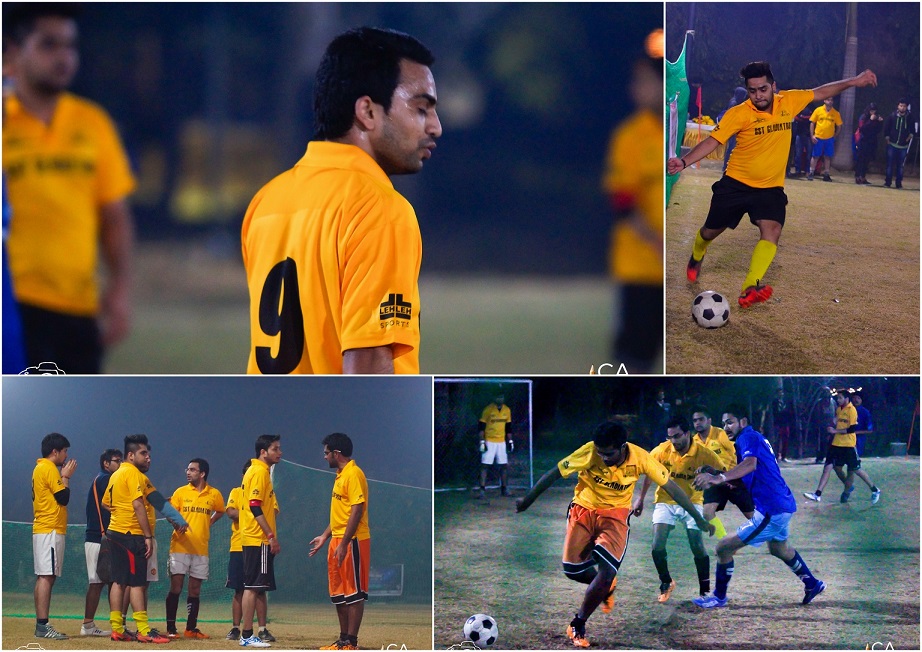 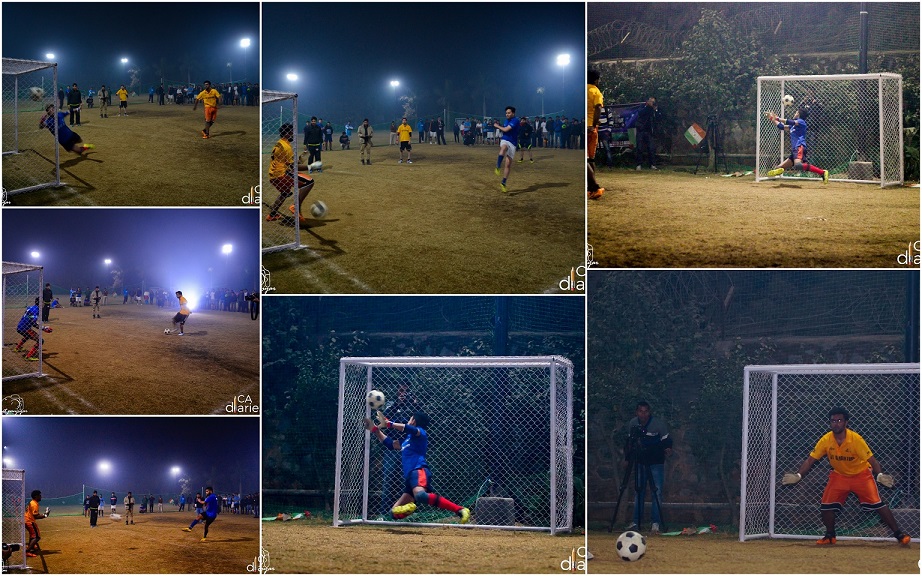 The match for 3rd position was held between the GST Gladiators & Penalty Savers, wherein the Penalty Savers won and ended at 3rd position in the League. All their team members were awarded the bronze medal at the closing ceremony.

The moment for which everyone had waited all day long finally arrived, the Final match: Legal Legends vs Sceptical Auditors battling against each other to win the prestigious title of Champions of CA Diaries Football League 2015. The last 20 minutes seemed to vanish in thin air with everybody glued to the match.  It was an adrenaline pumping experience to witness the players putting all their energies in defending/scoring the goal. The Sceptical Auditors took the lead in the game from the beginning itself; and emerged triumphant as undisputed champions with the spectacular score of 3-0. Spektical Auditors started dancing with everyone cheering loudly at their magnificent win. 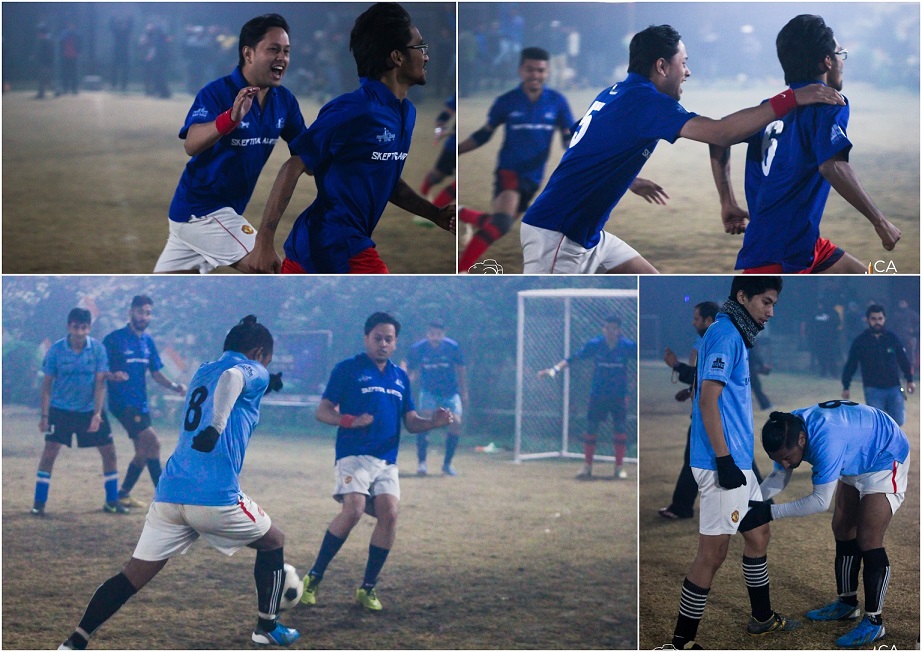 And the winner of First ever CADiaries Footlball league, the first ever football league exclusively for Chartered…

Our Top Goal Scorer Tarun Vij is the player of the week at InstaSports our online scoring partners. Thanks to…

The closing ceremony took place with participation medals awarded to all the teams. The runners up team were presented with the runners up trophy and silver medals for every team member. CA Tarun Vij, Captain of the first runner up, Legal Legends, had scored the maximum goals (11) in the League. Also, Santosh of the champion team, Sceptical Auditors, was declared as the Best Goalkeeper of the League.Both of these football stars were awarded lunch vouchers from Taj Vivanta, our Hospitality Partners.The winning team ‘Sceptical Auditors’ were handed over the winning trophy and gold medals by members of CA Diaries. And so a spectacular evening came to a heart-warming end, with the event being made a success with the contribution of each and every member present there. 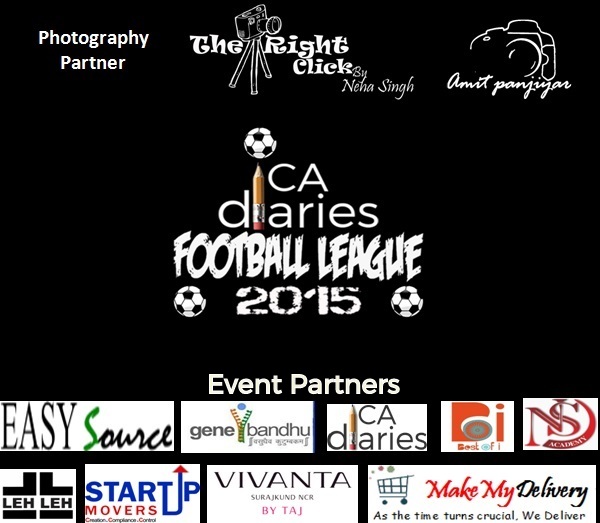 All the action from the ground> Event Audit Report > http://cadiaries.com/2015/12/ca-diaries-football-league-2015-audit-report/ 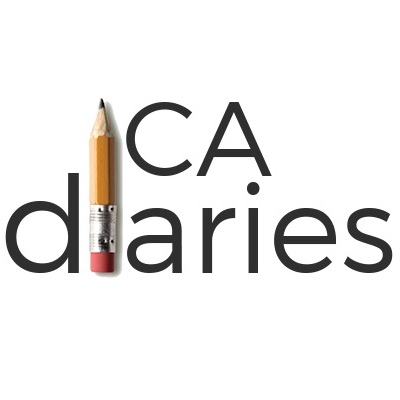